Our gorgeous 6ft tall amazon goddess Kylee sits on toilet boy's face in the washroom wearing black thongs and white yoga pants! She loves posing for the camera as he smothers beneath her gorgeous amazon curves! 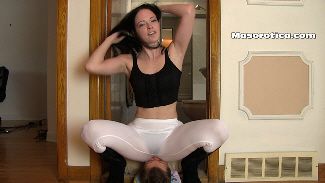 I want to control my slave's breathing - and I'll use my sexy ass to do it! Obviously the slave's not going to enjoy it and I'm wearing my skin-tight hard jeans for this facesitting. I sit down on his face without hesitation, smothering him and almost crushing his nose - like I would care! He's struggling more and more the longer it goes, but I won't stop anytime soon. In the end I just grab a magazine while I sit on his face and start reading - totally ignoring the loser struggling for air under me!

Julie, Bambina's worst nightmare and your favorite facesitter, comes into Bambina's bedroom and fock her face eight times. Taller and almost double heavier than little Bambina, she sits on her face and smothers her with pleasure and with sparkle in her eyes. She plays with her like with a doll and enjoys in her suffer. Every time, every day, Julie comes in different shorts. And with always new ideas for her little dolly girl. You will see the clips from time to time. So, save your bullets for the next one... Bambina is sleepy. She needs awakening. Awakening in yellow...

My ass looks even better than usual in white jodhpurs, don't you agree? Well, too bad you won't have much time to enjoy the view ... but you'll have enough time to feel my ass ... on your face ... smothering you! Again and again I sit down on your face and smother you - and I bet you loser even like that! Do you like it when I bounce on your face as well?!

AFIYA'S FIRST FACESITTING EXPERIENCE!"Well this sweetheart is your first facesitting experience and this is the bitch!" Krystal tells her friend Afiya! Afiya looks puzzled asking Krystal what should she do to him? "What you're going to do is sit on his face and smother the life out of him!" she says to her friend! "What?" Afiya asks looking a little confused. "Come on sweety just SIT ON HIS FACE!" she urges Afiya. "Oh my god..." Afiya says looking down at Walter feeling a little sorry for him. "No it's ok he's a little bitch he doesn't care, just CRUSH HIS FACE WITH YOUR ASS!"After some convincing her friend slowly lowers her ass as Krsytal films it! "There we go! Yeah like that!". Afiya then becomes more and more confident and comfortable with it. She starts bouncing on his face with her big black ass! The girls begin to laugh calling him a little bitch and whore! They make him beg for more BUTT CHEEKS! Krystal encourages her friend to BOUNCE harder and to CRUSH him under her ass! Afiya really gets into it! Grinding, Bouncing, and Dancing on his face! "I thought you were my little bitch! Now you're under my friends ass!" Krystal says a little jealous she's not the one sitting on his face but she's having fun directing her friend! "SIT DEEPER! BURY HIS FACE IN YOUR ASS!...Don't move! I want to see him to turn red!...Fucking SMOTHER under those ass cheeks!" Afiya then rides his face like a cowgirl while slapping his head laughing! The girls have a blast!KRYSTAL IS ONE BRUTAL DIRECTOR! SHE DOES AN EXCELLENT JOB DIRECTING AND TEACHING HER FRIEND ALL ABOUT SMOTHERING AND FACESITTING! BOTH GIRLS HAVE A BLAST WITH A LOT OF GOOD LAUGHS WHILE WALTER SUFFERS AND TURNS RED IN THE FACE! 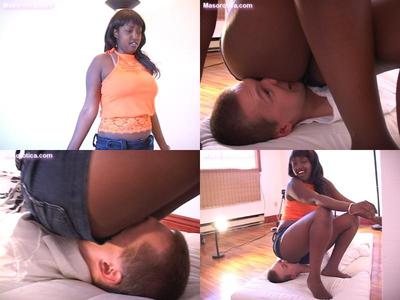 It seems he recovered a bit too quickly from the beating Jennifer had given out following their football argument, so she decides to do it again and really humiliate him. Firstly, she bends down and does a huge spit right in his face, which visibly trickles down the side of his head as he lies there on the floor, too scared to move. Next, she rubs her socked foot all over his face and begins to trample his stomach and chest. He is struggling already.It's then alternating between foward facesits, reverse facesits, and more of that hard trampling. At one point she dips her foot right into his mouth just to show him what a loser he is. She makes him tell her who the best team is and then continues to abuse him even after he admits it. At one point as she is reverse sitting him, she belts him really hard on the crotch a few times to make sure he doesn't get any funny ideas about trying to fight back.

BBW full weight facesitting at it's finest right here! This video is all about the enveloping head popping pressure of BigmommaKat's powerful ass! Herman doesn't stand a chance... once the lights go out, they're out until BigmommaKat says so!She makes a 3 person sofa look like a throne just for her.BMK starts out full weight side sitting Herman's face. From there she lays on him while she drains his air with some boob smothering. Short of Herman's little white socks sticking out at the bottom, he's entirely enveloped and controlled by BMK's girth. She then goes back to facesitting him while she wiggles and bounces full weight on Herman's little head.Once Herman has had enough of that, BigmommaKat gives him a break by sitting on his chest. You can tell from the sounds he's making that he's the one that's about to break! At one point she relieves him by standing up, only to lose her balance and come crashing down - all 600 lbs. As he moans, she cracks up laughing as if it's nothing major having that much weight come recklessly falling out of the air onto you.The fun continues from there with some true forward and reverse full weight facesitting. This is definitely one of BMK's classics!

I love it to torture my slave and have full control over him - and especially I love to control his breathing. With my ass on his face he has no chance to breathe - while I can decide how long I'm going to sit on his face and laugh about his pathetic existence. At the same time he's terrified by not knowing when I'm going to grant him the right to breathe again and I get to enjoy his panic!

Again Lady Kitty smothers him under her pussy and ass while enjoying her sweets. Without a little respect Kitty sits hard on her slaves Face and controls his breathing .

Following an argument after watching the football, Jennifer is tired and decides to completely humiliate the loser by sitting on his face, forward and reverse, over and over again. She looks at you into the camera quite often as if to say You're next!Lots of grinding and really rubbing her ass into his face! She slaps his stomach really hard a few times, in an attempt to really blow all the air out of him. Finally to finish him off, she hooks his legs under her arms in a matchbook-style facesit and all he can die is lie there, completely trapped and engulfed in ass and wait until she's finished with her total domination of him.

Two hot girls show their performance on the face of little Bambina. Modesty and Gia wear pantyhose and tight shorts. This is too hot for any words... Part 1 of full video "DuneFeet special video no. 144 HOT SPOT" with Modesty on Bambina's face.

This loser's breathing is controlled by me. I alone decide when and for how long he's allowed to breathe. I sit on his face and prevent him from breathing - while I slowly count up to 25 and enjoy his struggling under my ass. I open the long zipper on my facesitting pants and reveal my butt underneath. The slave should know what awaits him next ...!

3095 - Facesitting Session in my dungeon

Well then! Do you like my short hot pants? I bet you would like to see it on your face! Dream on, babe! Better watch me facesitting my worthless slave! His nose twists very well! So what! I really don?t care! Usually he doesn?t deserved being so near my pretty ass! Normally he would have to pay for this honour!

Introducing Morgan, an 18year old girl from Manchester UK. This is her first attempt at femdom and this girl is a natural. This clip is non-stop facesitting from start to finish. Coming at him with reverse sitting, she shocked us with how little air she gave him straight from the beginning. She barely lifted her ass off his face AT ALL until she was ready to change things up with forward sits and she continues grinding away slowly on his face with no regard to whether he could breathe or not. The was she grinds away on his ugly face is so sexy!

Walter's nose is so far up Kylee's bum she can feel him breathing through her leggings giving her a good laugh! "I can feel you breathing into my ass. I'm putting all my weight on your face now" she says cooing with relief."He really is ticklish. Ride you like a horse!" she laughs tickling him as she rides his face! At one point Walter struggles to breathe managing to escape the grip betwen her cheeks, "Stick your face back under my ass!""This is how much I care about your breathing!" Kylee says shoving her two middle fingers in his face as she remains seated despite his struggles!

Jolie Glamour is sitting comfortable on the old bastard permits her a glas of champagne. She sits on his old slavemug, so the fat ass cannot breathe. She has much fun taking his breathe and enjoys her champagne. His fat belly is very comfortable to sit and she hops on him until the old loser groans with pain.

I know there are a lot of losers who wish nothing else than suffering only one single time under my ass. Here is the clip for you little sluts. I crush my slaves body under my sexy ass. At first I crush my slaves dick under my ass, than I sit on his face. His balls were completely blue after this clip. ;)

This loser's breathing is controlled by me. I alone decide when and for how long he's allowed to breathe. I sit on his face and prevent him from breathing - while I slowly count up to 25 and enjoy his struggling under my ass. I open the long zipper on my facesitting pants and reveal my butt underneath. The slave should know what awaits him next ...!