Mistress Cleo loves to sit on her bound slave's face. She presses her butt hard on his face - shutting his mouth and nose. There's not much air left for him - he has to smell her crotch odor while she lifts her ass for a second - just to hit down again immediately. When he tries to turn his face away she grabs it and repositions it instantly. He has no chance!

Vera takes the slave's breath away in her sexy pink outfit! Again and again he has to sniff her butt as well!

Mercedes is sitting down on you. At first you get to feel her tight jeans.Then the pressure is getting stronger and stronger every second. Then she pulls down her jeans and you can see her hot pantyhose.Her ass is looking great in the pantyhose, and then you are flattened by it again. When Mercedes has teased you enough with her pantyhose she pulls it off as well.Now you can feel her naked ass on your face!

Anina knows about his preference and sits down on his face. She insults him and keeps his hands under control so he can't fight her off. He has to endure whatever she wants to do with him and Anina thinks he makes quite a comfy seat pad for her!

75264 - Slave gets punished with facesitting

I torture my slave under my sexy ass. I just sit on his face with my full weight and take his breath.

So ... do you still get some air? Do you like the position? Yeah, I bet you like it, so better thank me for it, jerk!

AFwrestling.com - Sara and Hailey meet once again for an encounter. Hailey had suffered from Sara before after Mia sent her to get her bikini back. Now this is a one on one match, Hailey hoping to win. Lucky for Hailey she manages to take Sara down. Hailey's confidence was at an all time high as she made Sara tap out, and enjoyed her perch ontop. Seems that was short lived as Sara fought back hard, reversing the roles now. Hailey now became victim to Sara's brutal facesits, and to make things worse for Hailey, Sara was starting to get off on Hailey's face. With sexual tensions rising, Hailey could do nothing but enjoy Sara's ass and pussy being grinded into her face, and you can see that Sara was enjoying every second of it, while Hailey fell into a deep state of mindfuck of her own sexual desires. 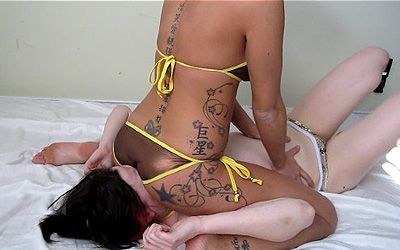 Jacky really likes to sit at this guy - He is very comfortable! But after some time she wants to try different positions! She tries to find out the most comfortable way to sit at him! But it's a pity for the poor slave that he still won't get any fresh air...

The slave has to lie under mistress Sunny's nylon ass today at first. Then she pulls down her pantyhose and sits down on his face wearing a thong only!

The two lesbians Anya and Canella are standing in their bedroom. Suddenly Canella throws her girlfriend at the bed. Anya is a little bit confused... next Canella starts to sit down on her - and grabs one of her tits! Anya still doesn't know what happens with her - but is too confused to resist! So Canella takes her advantage and presses her pussy hard against Anya's face - until her nose is dug in her pussy! But it looks like Anya is a submissive one - and so both of them enjoy the sensual, dominant facesitting game - and have lot of fun...!

Anina told him that they are gonna play some hot games ... well, I guess he had something else in mind when she tied his hands at the bed. He has no chance to move so Anina can play the games SHE has in mind: facesitting games. Great three minutes of hot smothering and facesitting action with verbal humiliation from top model Anina.

Captured by dominant Zora there is no chance to escape. Her prisoner is trapped under the floor, and Zora can do with him what she wants. She loves to humiliate him and sits down with her jeans ass on his face. Humiliation by face sitting, breath control and ass smelling - and Zora plays with him as long as she wants.

A clip all about my ass whom so many of you worship intensively. Nothing weakens you more than my incredibly hot ass, nothing lets you cum harder and nothing lets you pay more. You are addicted to the sight of my ass. Being allowed to serve Lizz La Reigns means being allowed to serve perfection and my divine ass is the culmination of that perfection. Losers have spend thousands of Euros for my divine ass and there are thousands to come. You have to submit to my beauty and dominance and must give in completely. Its a matter of fact that there is no submissive worm out there who could resist the sight of my beautiful ass and a huge amount of losercash in front of it. The clips comes with a countdown in the end because you wont manage it to watch it without jerking. Try me !

Lady Anina has tied up her slave in her studio! Now she punishes him with strokes while she uses him as her personal seating cushion!

Mrs. Jackson's enslaved husband is already in position - with his head lying on a chair - ready and waiting for his bossy wife to come and sit down on his face. That's the best position to be working on the desk for Mrs. Jackson - nothing as comfy as sitting on a face afters years of conditioning.

Melissa is going nuts - a peeping tom spied on her on the toilet! If he's interested so much in what she does on the toilet he can smell her ass as well. She presses his head into her ass and orders him to lie down on the ground so she can place her hot ass right on his nose. Isn't it tasty to smell her ass just seconds after using the toilet? The peeping tom better likes it! Melissa isn't really squeamish and puts his nose right into his ass again and again.

As punishment, today there will be face sitting with Michelle's sexy blue jeans. Under her ass the loser will now suffer. He simply has to bear her weight, no matter what. Michelle sits down again and again on his face, in her jeans. Her slave is now her personal seat cushion. Not even her slave begging gets her to reconsider. When Michelle wants to sit, then she will sit; with all her weight. Now the face of the Michelle?s slave Michelle will be abused extremely and he will realize what it means to be a real jeans sitting slave.